Far from the madding crowds and blanketed in nature, the secluded retreat of the Boat Rooms are what dreams are made of.

The concept of the "Boat Rooms" was inspired by a local social custom. A water tribe, 'nine fishing families', had lived at the riverside and developed a distinctive boat-living culture between the Ming Dynasty and the Qing.

The Yanzhu Lake is where the Mountain Spring water flows into the Fuchun River. The steady water level is a vital factor for the Boat Rooms, however, the most challenging part of the design involves the docking and preventing environmental interruptions.

There is a poetic expression from the five boat rooms as they symbolise the relationship between a boat and the water in the natural world.

The rooms are elevated higher than the lakeside in order to benefit the project's values of being free of earth construction and habitat destruction - the elevation also makes the rooms appear to be ‘floating’ above the lake. The trees were seen as a priority and determined the layout of the rooms by their existence to ensure the surrounding environment was unsettled.

As special rooms gather around Fuchun New Century Wonderland Resort, water supply and drainage of the Boat Rooms are connected into the network system of the Resort, covering fire and domestic water usage.

Prefabricated timber structures were assembled on site with the main body of the room being supported by steel-pipe piles that fix to the bottom of the lake, which avoids cofferdam contstruction and disturbing the force of the water system. Domestic wastewater drains into three artificial micro-ecological filters utilized for treatment for the Resort. To eliminate sewage discharge to the Fuchun River, the treated water is then gathered into a pool before being pumped for recycling in landscaping and car washing. 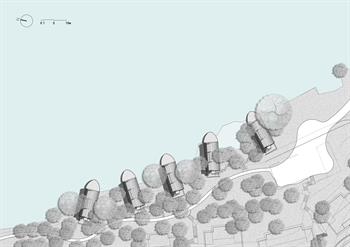 The design, construction and management ensures that non-destructive approaches have been made towards the natural water system and the lakeside environment. The Boat Rooms have emerged into their surroundings without producing any ecological disturbances.

The World Architecture News Awards showcase the best international design in both current and future projects. Entries for the 2019 Awards are now open - for further information and to submit your entry please click here.

Rahul Mehrotra has been appointed as Chair of Depa...

In lockdown? Plan and submit your entry for 2020 WAN Awards and WIN Awards

Amongst the many challenges and uncertainty the wo...